So I decided to enter the Casserole Crazy Competition this year at the Brooklyn Kitchen. I have been wanting to make tamales for quite some time now, and this was a great excuse. I didn’t have to tie any corn husk bundles, and i got to eat a crap ton of tamales. Win.

Nutrition – I had NO IDEA how horrendous tamales are for you. NO IDEA. Well, so you know, they are HORRENDOUS for you. But healthy don’t win competitions, so I went all out.

Also to note, they are very time consuming! The following recipe was a 3 day process. I will go ahead and warn you that I am nowhere near a professional, and there are a ton of things I’d change should I ever do this again. But since thats not gonna be any time soon, we will just have to look back on this some day and laugh. but for now, this thing was GOOD.

TASK ONE – PULLED PORK. I started this 3 days in advance. I wanted to use dried chiles, didn’t find any in my hood, moved on to using chipotle chile powder and tomatoes. Next time. 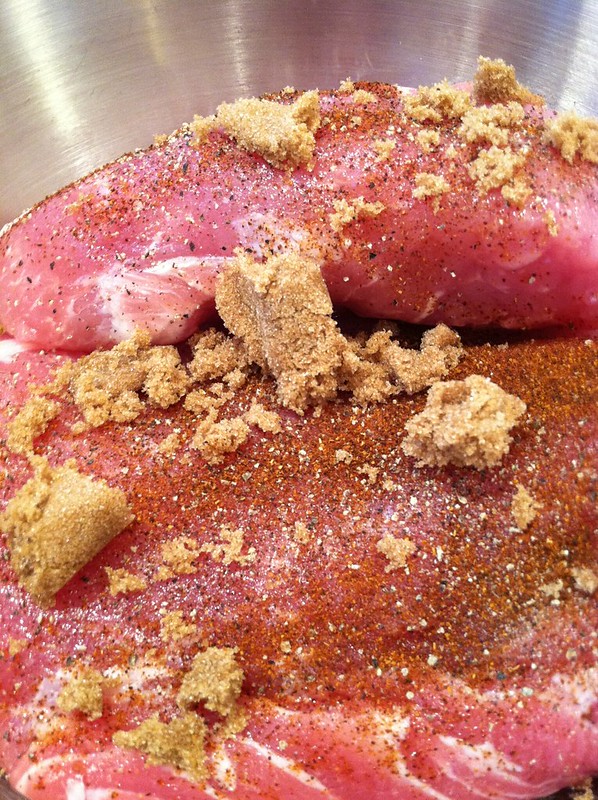 Rub your pork hunk of choice in fresh ground sea salt, pepper, and brown sugar. Sear that baby on all sides in a giant stockpot or on your grill. Remove from heat. Refrain from licking it, or don’t. 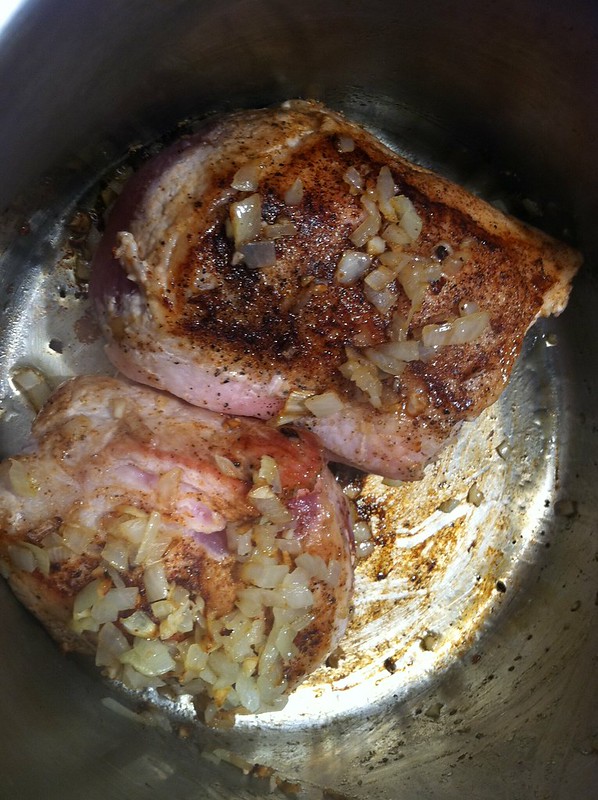 Cook garlic and onion in a pan in a little oil and then add your pork back in to the pot. Add the rest of the ingredients, cook on low for 3-4 hours, or until meat is cooked all the way through and feels tender. 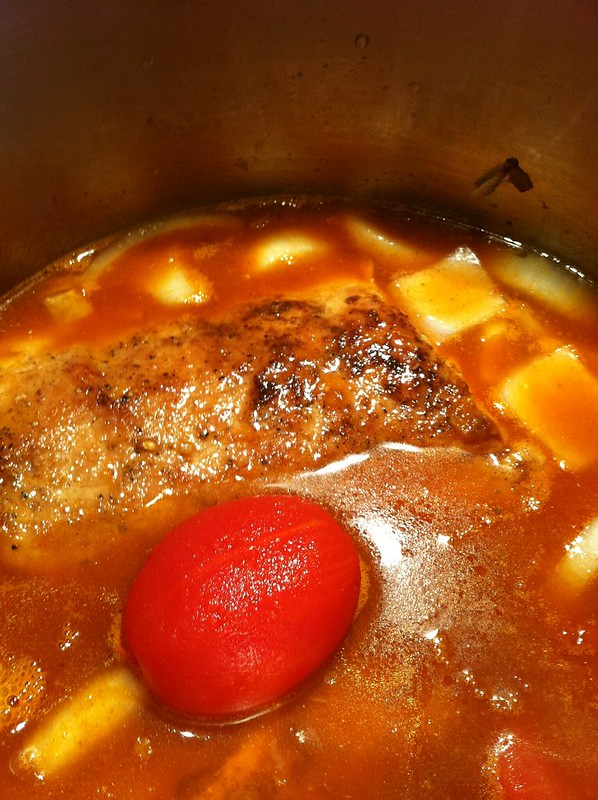 I decided to put my entire pot in to the fridge to marinate and soften overnight. Then in the morning, I shredded it and cooked on low for another hour before layering. This was the result. 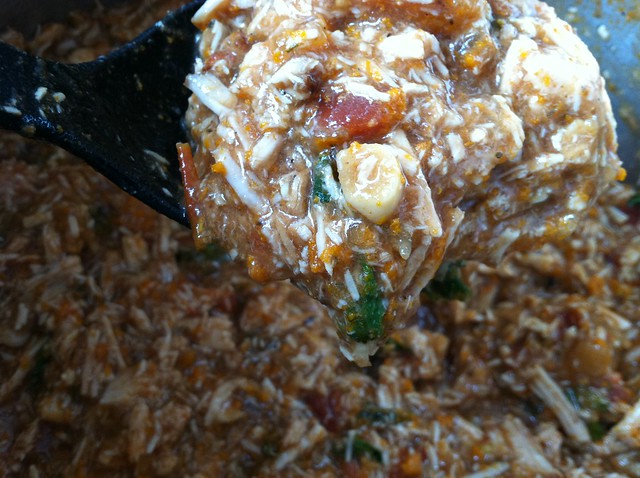 Heat your duck fat to melty and hot, add in chopped pepper, chiles and onions. Cook until soft. 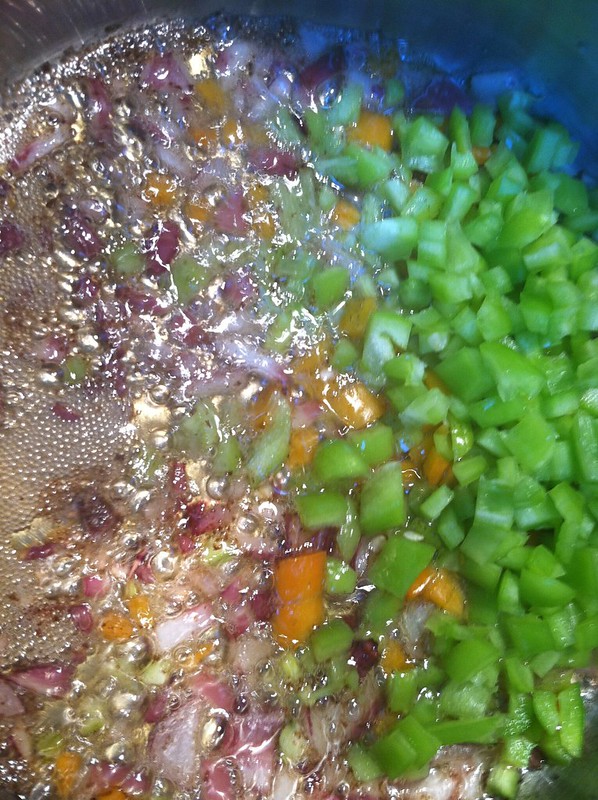 Add your beans! Evidently using canned beans is blasphemy in the foodie world, but who cares. 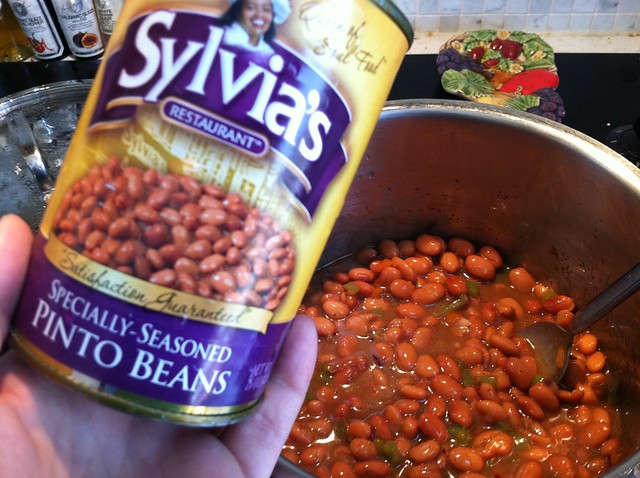 Cook these for a couple hours until they are mashable and them smash them in to a nice, healthy looking paste. Then go to write your blog and realize you were doing so many things at one time that you forgot to take a picture. Complain about said fact, and maybe The Green Bee sitting on your couch will take pity on you and draw a picture of what they might have looked like. 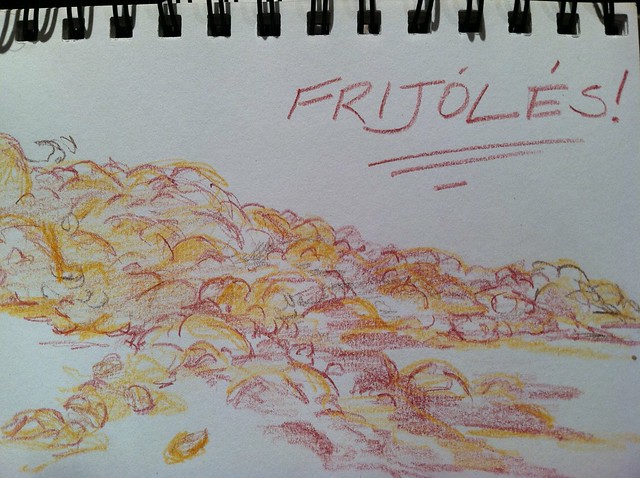 Mix Maseca, water and stock. In a separate bowl, beat 1 1/2 cups shortening with beaters. Not sure why I did this part, but the internet said to. Add to dough and mix until blended, and dough is airy and fluffy and awesome.

Grease casserole dish with leftover shortening. I did a 14 x 20 pan as well as a 6″ round casserole dish, one for the competition, and one personal for tasting. Spread about 1/2″ of masa dough at the bottom of each pan and cook for 15 minutes at 350. 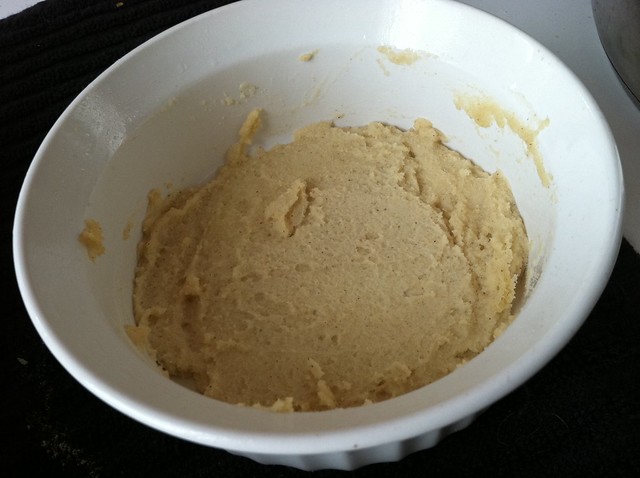 Layer your casserole by following the below diagram 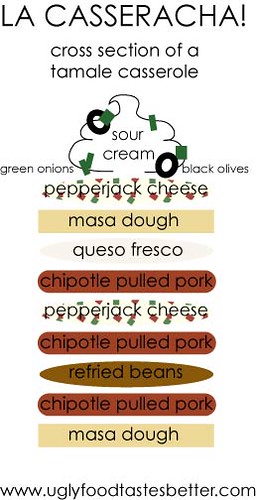 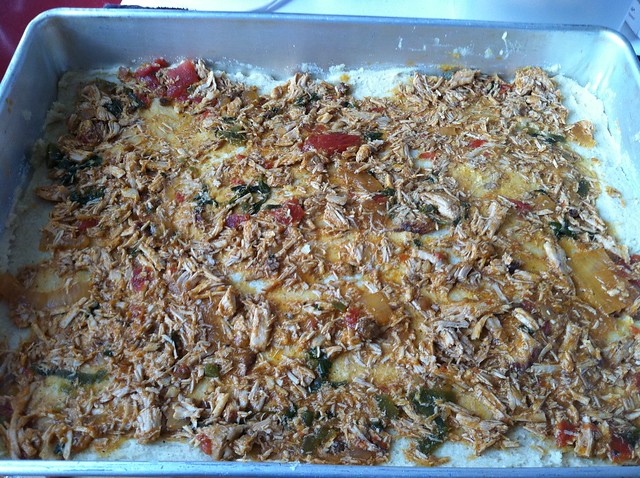 This is the point where I realized why no one makes tamale casserole. MASA. It is damn near impossible to spread that shit. I ended up resorting to rolling it out on whole wheat flour into randomly sized flat 1/2″ shapes that I used to form a pangea-like crust atop my layers. Cover the cracks with more cheese. Clearly.

Bake at 350 for 40 minutes. Let cool, cover and put in the fridge. I am a firm believer that casseroles and lasagnas need at least a day to marry before they hit deliciousness, and are even more yummy after frozen and defrosted months later when you have forgotten about them. 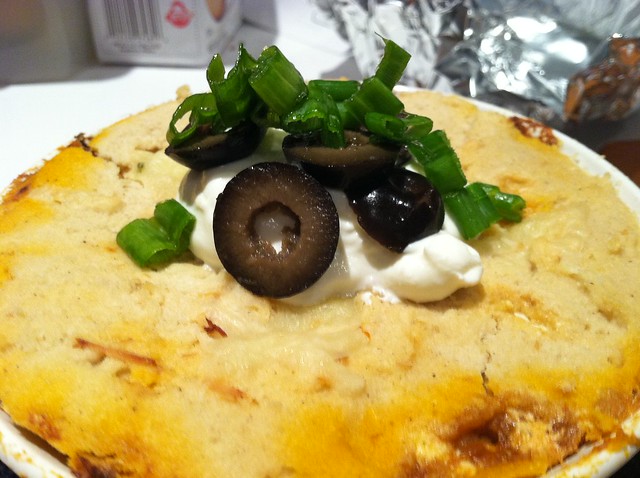 I reheated the big one for 30 minutes prior to competition, Then, I built a border, I meant to make jalepeno Mexicans trying to cross, but I ran out of time. And no one got it. BOO. 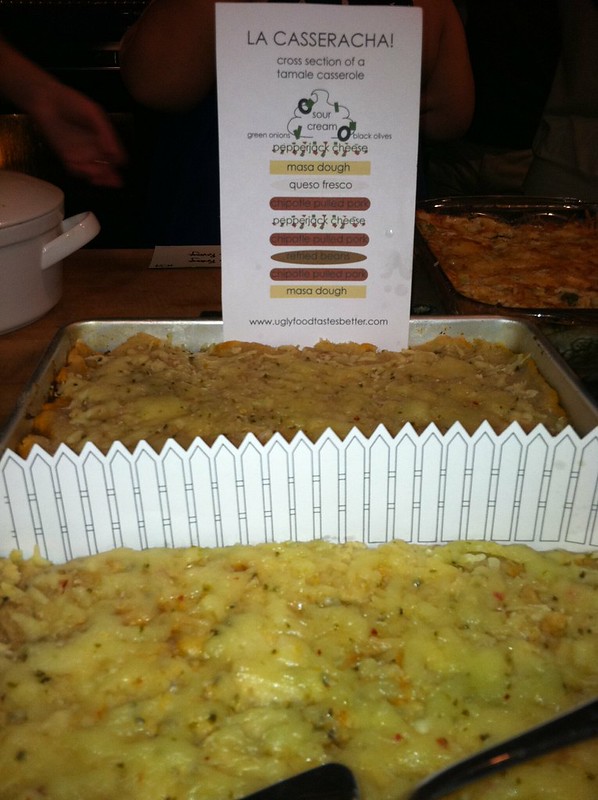 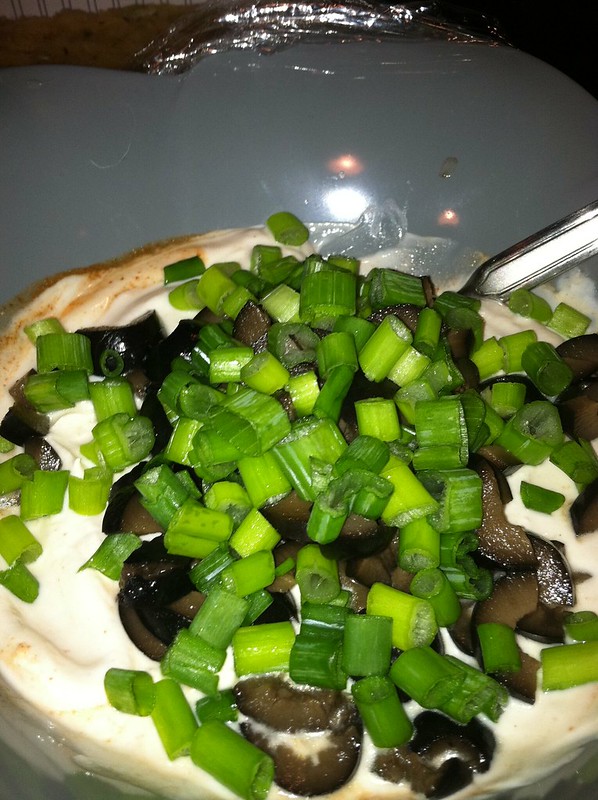 But the event was really fun even if it did leave me feeling sick, probably because i had previously been eating brothy soups and steamed veggies for a week. 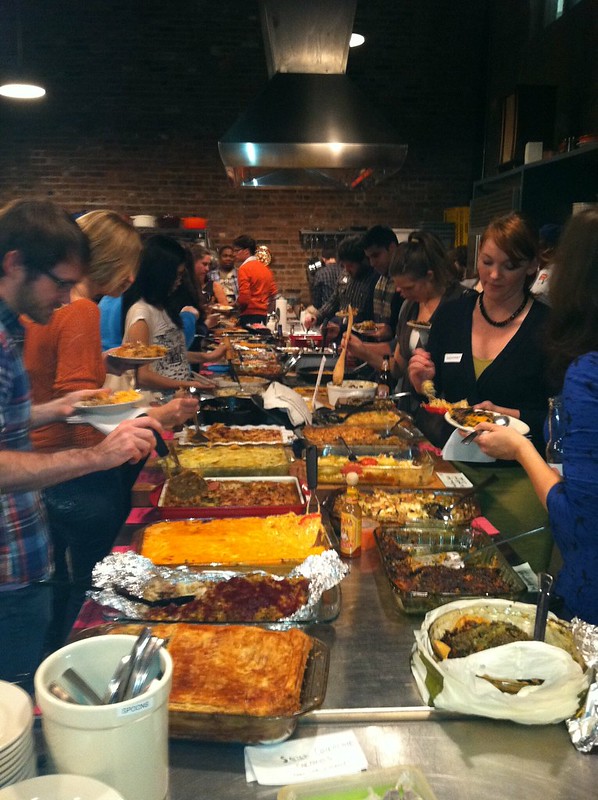 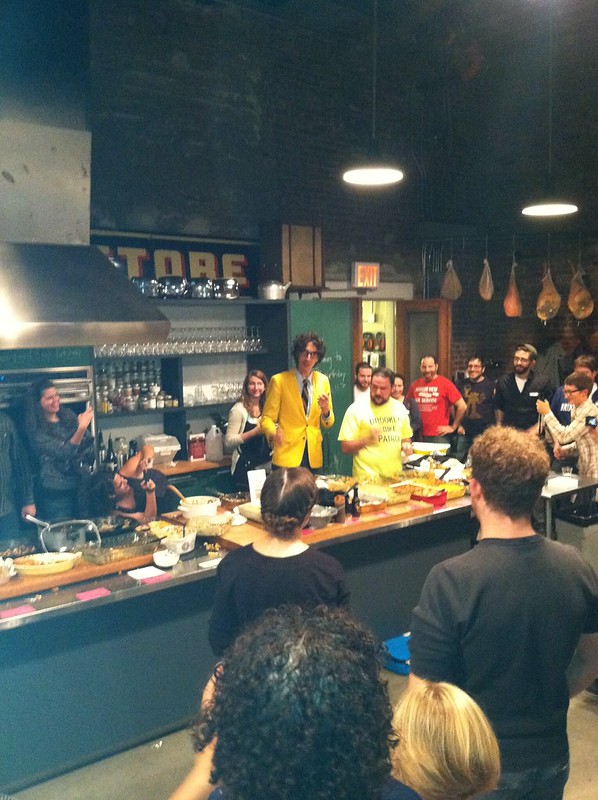 And you can see more pictures in the brooklyn paper article here.

This was the winning cheesburger casserole named “Damn, Gina!” : ) you can see a lovely recipe here at Hell and Heartaches Enjoy! 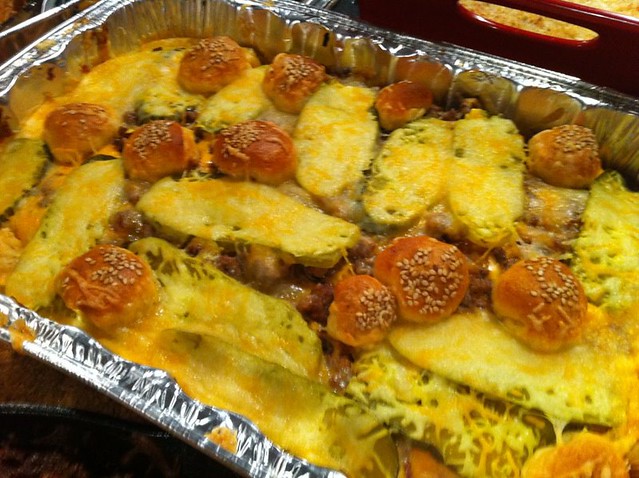 HOORAY!!! SUCCESS!!! Oh wait. I didn’t win. Oh well. However, my favorite casserole at the event didn’t either, so maybe the judges have bad taste! haha. It was an Oktoberfest themed amazingness, link below. 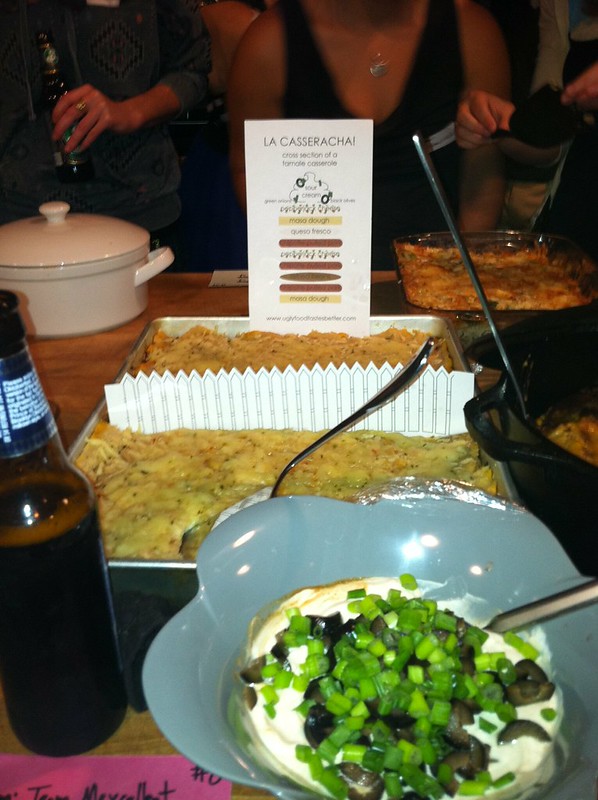